Study Shows that the More You Spent on your Wedding, the More Likely you are to Divorce 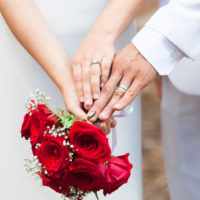 According to a study by two economics professors at Emory University, how much money a couple spends on their wedding is positively correlated with the likelihood of the marriage ending in divorce. In the study, the professors interviewed 3,000 heterosexual couples, some of whom were married at the time of the study and some of whom were divorced.

If you spent a lot of money on your wedding, do not fret that the marriage is doomed to fail. There are a lot of factors that can increase or decrease a couple’s likelihood of divorce and remember, these statistics are just that: statistics. They do not tell your personal story.

On average, an American couple spends about $30,000 on their wedding. This figure can fluctuate widely, with some weddings costing less than $1,000 and others racking up six-figure bills.

There was only one wedding-related spending decision found to reduce a couple’s likelihood of divorce: taking a honeymoon.

Other Factors that Impact a Couple’s Likelihood of Divorce

There are many other factors that can raise or reduce a couple’s likelihood of divorcing, like the partners’ careers and how old they were when they married. Second and subsequent marriages are more likely to end in divorce than first marriages.

Any marriage can end in divorce when it reaches the point where the couple cannot work out their conflicts. If you have reached this point in your marriage, consider whether divorce is the right option for you. For more information about the divorce process and insight to what it entails, speak with an experienced Orlando divorce lawyer. Contact the Law Offices of Steve W. Marsee, P.A. today to set up your initial consultation in our office.