Which Couples are Most Likely to Divorce? 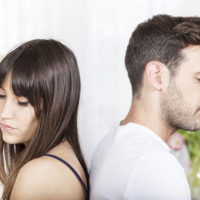 When a couple gets married, divorce is likely the furthest thing from their mind. But not every married couple stays together for the rest of their lives. Among first marriages, about 35 percent end in divorce within the first 10 years.

Not every couple has the same likelihood of divorcing. There are certain factors that can increase or decrease a couple’s chance of their marriage ending in divorce. Below are a few common predictors that a couple will go their separate ways.

Statistics show that couples who marry young – in their teens and early twenties – have a higher divorce rate than couples who wait until their late twenties and early thirties to marry. However, an individual’s divorce likelihood begins to rise again when he or she turns 32, making 28 to 31 the “sweet spot” for lasting marriages.

Couples who Live in Nevada

Couples Who have Expensive Weddings

Couples Comprised of Partners Who have Been Divorced Before

If an individual is divorced once, the likelihood of his or her second marriage ending in divorce is higher than the likelihood that his or her first marriage would. This could be because getting divorced can change an individual’s perspectives of marriage and relationships, making him or her more pessimistic about a relationship’s future and more attuned to the conflicts that drive a couple toward divorce, potentially making him or her more likely to seek divorce when facing these conflicts, rather than seeking marriage counseling or trying other strategies to repair his or her relationship.

Couples Where One Partner is a Gaming Manager

Perhaps it is because of the long hours at the casino or the stresses of being in that type of high stakes atmosphere; gaming managers have higher divorce rates than individuals in other fields.

Other professions linked to high divorce rates include:

In contrast, professions linked to low divorce rates include:

Certain factors can increase your likelihood of divorce, but they cannot predict a divorce. Not fitting into the categories above is also not a guarantee that you will not divorce. If you have determined that your marriage is over, speak with an experienced Orlando divorce lawyer to learn more about the divorce process. To get started, contact The Law Office of Steve W. Marsee, P.A. to schedule your initial legal consultation with us.