Divorce Rates Have Tripled Among People Over 55, a New Study Shows 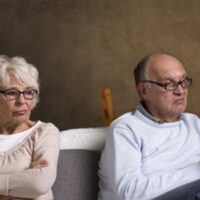 A new study has found that divorce rates have tripled among Baby Boomers, which is a term used for people who are currently 55 and older. As older women are living longer and have become less dependent on their husbands, they are no longer reluctant to seek a divorce after 55.

In today’s world, people want to live a happy life regardless of their age. They do not want to spend years or decades in a loveless marriage with a lack of intimacy. While there used to be a stigma attached to getting divorced after 55 or 60, Baby Boomers are now more likely to make risky decisions, explore new romantic opportunities, and rebuild their life from scratch.

People aged 55 and older are no longer willing to put up with marital problems. All of this is evident from a new study reported by The Oklahoman on June 15, 2020.

Divorce Rates Among People Over 55 and 65

While statistics show that divorce rates among younger couples are declining, the same cannot be said about gray divorces. The U.S. divorce rate is currently at a 40-year low, as it fell almost 30% in the last four decades.

There are various reasons why people get divorced after 55 and older. Some of the common reasons are:

Also, many divorces among people over 55 are stemming from second marriages, which are known to have a greater risk for divorce compared to first marriages.

Advantages of a Grey Divorce

While seeking a divorce after 55 or 65 can be more intimidating than getting divorced after 25 or 35, there are still many advantages of getting a grey divorce

People who are not happy in their marriage could benefit from seeking a divorce regardless of age. While reentering the dating world later in life can feel scary and confusing, finding a new romantic partner can give you a new purpose in life.

Getting divorced after 55 or 65 could also be beneficial if you have always wanted to explore new interests and try new things, but your marriage is always holding you back.

Disadvantages of a Grey Divorce

Despite the many advantages of getting a grey divorce, there also many drawbacks to consider. First of all, the process of getting divorced later in life can feel too overwhelming, not to mention that ending a marriage after 55 or 65 can be an emotionally exhausting process.

Second of all, there may be complications with the division of joint assets and debts due to the following factors:

If you are considering getting a divorce after 55 or 65, consult with a skilled Orlando divorce lawyer. Here at the Law Offices of Steve W. Marsee, P.A., our experienced lawyers will help you understand your options and answer your questions about a gray divorce. Call at 407-521-7171 to receive a consultation.