Can You Lose Custody of Your Child for Being on the Front Lines of the COVID-19 Battle? 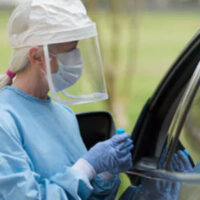 Many of those brave people on the front lines of the battle against the COVID-19 pandemic, including doctors and nurses, have children. In fact, many of them are divorced parents who share custody with their ex-spouse.

“But can the first responder’s ex-spouse withhold child visitation or deny any contact with their kids just because the other parent is exposed to COVID-19 on their job?”

Hundreds of thousands of divorced parents who are fighting coronavirus on the front lines are asking this question following a controversial decision by a Florida judge to temporarily take away an emergency room doctor’s custody rights.

As reported by CNN, a divorced ER doctor in Miami temporarily lost custody of her daughter in what she calls a “discriminatory” ruling. The woman, who has a 4-year-old daughter, argued that healthcare workers who use proper precautions are not at an increased risk of contracting coronavirus.

She called the judge’s decision preventing her from seeing her child “discriminatory.” The woman is appealing to the controversial ruling, which she argued discriminates against her as a divorced parent. She argued that she would have “the opportunity to go home to my child” if she was still married.

The woman and her ex-husband had joint child custody of their 4-year-old daughter. Following the decision, the daughter will now be in the father’s sole custody during the COVID-19 pandemic. The ruling was made by Florida Circuit Judge Bernard Shapiro in order to “limit the risk of exposure to coronavirus.”

In his ruling, Shapiro insisted that the ruling is intended to “insulate and protect the best interests and health of the minor child” due to the ever-increasing number of confirmed COVID-19 cases. He also stressed that the order must be entered on a temporary basis.

Can Florida Parents Restrict Access of the Children to First-Responder Parents?

As the number of confirmed coronavirus cases in Florida and across the country keeps rising by the day, more people are becoming concerned about their children’s safety and health during the pandemic. This situation led to a surge in custody disputes in which a parent is withholding child visitation simply because the other parent is a first responder, doctor, nurse, or another “essential” worker who is exposed to her virus on the job.

The lack of guidance from local authorities prompted divorced parents who work on the front lines to seek help from the court system. Given that Florida’s court system has been largely paralyzed due to the COVID-19 pandemic, many parents are not able to get a speedy response from the court.

So far, many courts argued that children should spend time with both parents, even in these difficult circumstances, but Shapiro’s ruling seems to contradict these arguments. In Florida, several circuit courts have issued orders regarding parental time-sharing during the COVID-19 pandemic.

The Ninth Judicial Circuit for Osceola and Orange Counties issued an administrative order requiring “continued adherence to all orders” that award parental responsibility or time-sharing. The order also prohibited parents from “unreasonably restricting access” of the kids to the other parent “unless otherwise prohibited by an existing court order.”

If you are a divorced parent whose ex-spouse is attempting to restrict access to the children during the COVID-19 pandemic, talk to our Orlando child custody attorneys at the Law Offices of Steve W. Marsee. Call at 407-521-7171 to discuss your situation during a consultation.